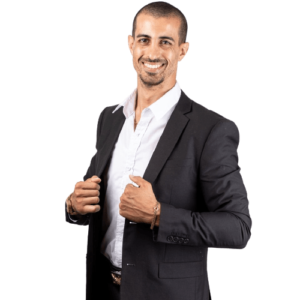 Becoming a big and trusted name in any industry takes a lot of sacrifices, especially in the internet marketing sector where there are hundreds of millions of people doing the same things. Such is the tale of Itay Verchik.

Hopping on a rollercoaster ride since the age of 19 when he left his family to be enlisted in the Israel army, serving for three good years at such age of 18 to 21.

We can totally agree that those three years toughened him up and built his resilient and determined spirit as he marched on from there to set up some of the most successful companies in different areas both in Israel and America.

Before setting up those businesses that we know him for now, Itay, at the age of 22, developed a business in the website building and internet marketing niches. What you can now refer to as digital marketing.

He ran the business into his mid-twenties around the age of 24 and was able to attain the position of a product manager as well as a partner in a start-up Israeli company. That company grew to become successful, achieving preset objectives and goals due to the managerial influence of Itay Verchik.

After years of working with the company, Itay went on to set up several businesses, projects, and ventures, which would become successful just a few years after. Some of those companies include WebZash, IVBS, SEO MANUAL in the U.S.A in Florida and several others.

Success in these ventures created a new phase for Itay Verchik as he became a young Israeli millionaire, even during the Corona time. Managing his wealth, businesses, and personal life was daunting at first but it wasn’t something he could not handle. He has since become a source of inspiration and motivation to so many young individuals who want to make something out of their lives,.

Itay Verchik has gone far and wide into the world of business, venturing into some of the most daring and daunting businesses. You can say that he never thought he would be running these businesses as a younger man, but he knew he wanted to be great and to become great, he had to dare and to sacrifice, and he did just that.

Itay is now the founder of a United States’ start-up — Florida to be precise. He hasn’t stopped there. He is now a real estate enthusiast and investor and also trades in the stock market for leisure and just for the love of it.

Itay Verchik’s success journey is one that we can all reckon with.

The fact that he is still enthusiastic about getting even further, encouraging people to become their best, and being a living testimony that the biggest things can be achieved when we decide that we really want them to happen, not minding our backgrounds or stories.

Although Itay has been venturing into so many businesses that may be different from what he started with, he hasn’t given up on his digital marketing dream. He has since been working on several projects trying to get people’s websites to rank on search engines.

The project he is currently working on is known as SEO MANUAL LLC.

If you are conversant with SEO or own a website/blog, you would know how important it is to get your website or pages to rank on the first page of search engines.

It takes a lot of effort and knowledge to know the right links to use, the perfect content, number of words, number of keywords and phrases, and many more.

The SEO Manual does all these things for you, taking the burden off your shoulders.

Imagine an SEO tool that can track what your competitors are doing to make them stay at the top of SERPs (Search Engine Result Pages) and help you determine how you can follow the same guidelines even better to make you rank just as high or even higher. That is what Itay Verchik will be sending out in a short while.

For the future, the SEO Manual system will also be able to track ads all around the social media and show the user what are the best ads and creative to use for himself!

The journey from the little soldier boy to the confident business mogul is not only an inspiration, but also a reason to trust the man behind the wheels.

He has tasted and tested several levels of success and he is transferring that mantra to new business owners. You can benefit from his wealth of knowledge and experience too. He is always willing to help.

Leave your details here, and we will get back to you: